Researchers are noticing a surprising “parallel pandemic”: a significant rise over the last 18 months in the number of teen girls and young women exhibiting verbal and physical tics. Since COVID began, females aged 12 to 25 around the world have been reporting the onset of these Tourette’s-like symptoms at unprecedented levels.

Moreover, the social media app TikTok appears to play a part in triggering or exacerbating the behaviors. That’s why they have become known as “TikTok tics” or “TikTok Tourette’s.” But these tics aren’t caused by Tourette’s syndrome. So what is the underlying reason for this strange phenomenon?

The Sudden Increase in Tic-Related Disorders

Starting in the early spring of 2020, as COVID isolation guidelines went into effect, pediatricians and mental health experts began noticing an increase in cases of severe tic symptoms among female adolescents, in countries including Canada, the United States, the United Kingdom, Germany, and Australia. According to a report published by the International Parkinson and Movement Disorder Society, referrals for these tic-related conditions before the pandemic made up between 1 and 5 percent of total cases among young people. Currently, they account for 20 to 35 percent of cases.

These teen girls and young adult females have been experiencing a rapid progression of tic-related symptoms, such as explosive vocal utterings and involuntary muscle contractions and twitching. Some patients reported previously diagnosed tic disorders that had gotten worse, while others had never experienced these issues before.

While this phenomenon is being referred to as “TikTok Tourette’s,” the symptoms that doctors are seeing are unlike Tourette’s syndrome in several ways. For one, Tourette’s is four times more common in males than females. Moreover, it typically begins in childhood rather than adolescence. In addition, Tourette’s has a clear neurological basis that is not evident in these patients. Instead, these young women appeared to be suffering from functional movement disorder, a type of conversion disorder in which stress and anxiety manifest as physical symptoms such as tics.

What Is a Conversion Disorder?

A conversion disorder is defined as a psychological condition that causes physical symptoms. Conversion disorder symptoms usually appear suddenly, at the time of a traumatic or stressful experience—such as the isolation, anxiety, and fear associated with COVID-19.

According to the DSM-5, a conversion disorder includes the following criteria:

Hence, the rise in tic-related disorders appears to be one of the effects of social isolation in adolescence during the pandemic. Along with rising suicide rates, increased depression, and collective trauma, TikTok tics are yet another of the mental health consequences that Gen Z—teens and young adults—has experienced during the last 18 months.

In studying this issue, researchers have found that the symptoms seem to be spreading “virally” through social media, specifically via teen and young adult influencers who document their Tourette’s or tic disorders in TikTok videos. TikTok user statistics show that, throughout the pandemic, tic-related videos on the app have steadily gained popularity among teens. One study found that in March 2021, views of videos with the keywords #tourette and #tic increased by 7 percent, to a total of 5.8 billion views.

The study also found that 68 percent of teen girls with these issues said that viewing tic-related videos by content creators had caused their “TikTok tics.” In one case reported by the International Parkinson and Movement Disorder Society, six teen girls reported exposure to one particular social media influencer before the onset of symptoms. This may help explain why more teen girls are afflicted than boys: Females are more likely than males to use social media as a way to connect with others and are also more susceptible to its negative effects. 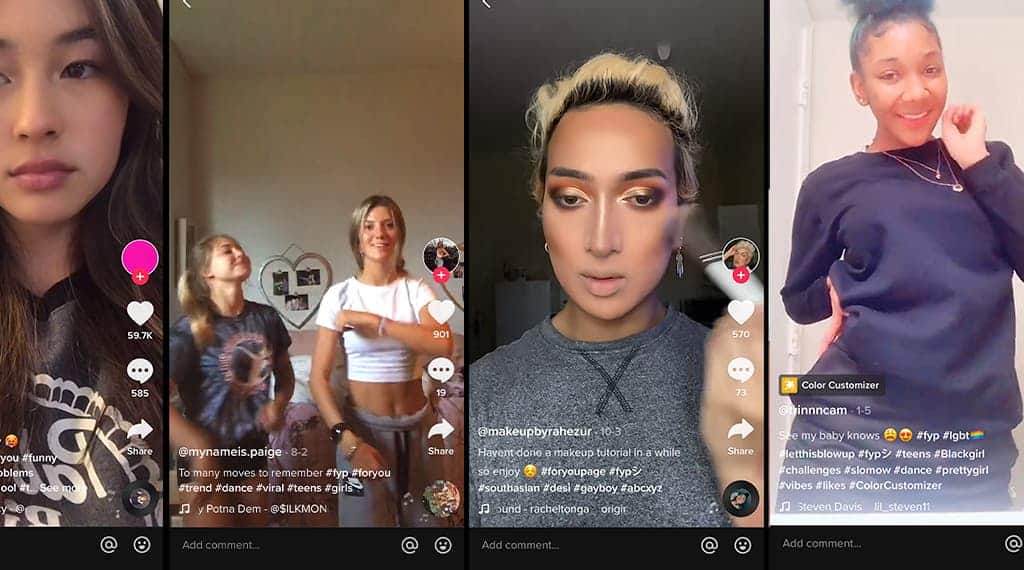 Consequently, mental health experts believe that this is an example of a mass psychogenic illness, or mass sociogenic illness, which is far more common in young women than any other category. Examples of this type of occurrence include a rash of tic-related disorders among teen girls in Le Roy, New York, in 2012. Neurobiologists theorize that mass psychogenic illness could involve mirror neurons—regions in the brain that are activated by watching someone else perform a movement. Moreover, it may be associated with the desire to connect with others and feel a sense of belonging. Throughout history, mass sociogenic illnesses were confined to one location or community, because they are spread through seeing and hearing others. But in the Internet Age, they can spread around the world in seconds.

So is TikTok safe for teens? In general, the teens who are most vulnerable to mass sociogenic illnesses like “TikTok Tourette’s” are those who have a previously diagnosed mental health condition, such as generalized anxiety disorder, OCD, or ADHD. However, the research seems to indicate that the TikTok videos may be triggering symptoms in teens who are suffering from pandemic-associated anxiety disorders and traumatic stress, but haven’t yet been diagnosed or treated.

“We believe TikTok tics to be an example of social contagion or mass sociogenic illness, which involves behaviors, emotions, or conditions spreading spontaneously through a group or social network.”

When a teen is suffering from TikTok tics, it’s important to first rule out medical factors. A comprehensive assessment should include a physical exam to rule out Tourette’s syndrome or another neurobiological cause. If no physical causes are discovered, a full mental health assessment is the next step. If an anxiety diagnosis is made, residential or outpatient treatment is often the most effective solution.

At Newport Academy, we treat anxiety disorders by addressing the underlying trauma and attachment wounds that catalyze mental health issues and maladaptive behaviors. We also take into account current circumstances, such as the potential effects of social isolation in adolescence. Each teen’s individualized treatment plan includes evidence-based modalities like Cognitive Behavioral Therapy, Dialectical Behavioral Therapy, and EMDR. In addition, teens bond with peers in group therapy and experiential sessions, ranging from Equine-Assisted Therapy and Adventure Therapy to creative arts and horticulture therapy.

Ultimately, although tic disorders can be very frightening for teens and families, anxiety-related conversion disorders like TikTok tics are very treatable. Reaching out for help and support is the first step on the path to healing. Contact us today to learn more about our industry-leading approach to healing young people and families.