The Academy of Child and Adolescent Psychiatry reports that nearly one in 200 adolescents suffers from Obsessive-Compulsive Disorder (OCD).

In a classic case of Obsessive-Compulsive Disorder, a person is consumed with an unpleasant thought. These thoughts may include:

Negative OCD thoughts often appear at any time without warning. The teen might dream about the images or find them floating in the background at all times.

In order to banish those unwanted thoughts, the person with OCD begins to engage in a series of rituals. These rituals can function as a distraction, to help the person think about something else until the unpleasant thought disappears. Or, the behaviors exist as protection, to keep the negative thought from becoming a reality.

These compulsions can vary widely, but they might include:

According to an article published by Massachusetts General Hospital, many teens work to hide their rituals from their friends and family members. Also, teens may become extremely upset when a ritual is inadvertently interrupted.

Some teens seem to know that the thoughts they have or the rituals they engage in aren’t helpful and don’t really make sense. Even so, they may be completely unable to stop the behavior, no matter what their conscious mind might say. Younger adolescents may not have the ability to express feelings about their behaviors and instead claim that the actions are simply “required” or “necessary.”

It’s important to note that this is a classic presentation of OCD, but the reality is that each person might exhibit slightly different symptoms.

Consequences and Side Effects 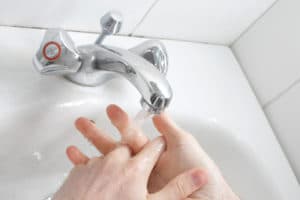 As OCD grows stronger, the teen may spend more and more time on compulsive behavior. The teen may grow resistant to going to school or participating in family activities. Teens with OCD can spend hours each and every day on their compulsions. Their grades may slip, their friendships may fall away, and their ability to work declines.

Teens may also devastate their relationships with their families during this process. The fights they engage in, the tantrums they throw and the absence they demonstrate can be incredibly difficult on the connectedness of the family.

According to the National Alliance on Mental Illness, OCD is linked to an imbalance of the brain’s production of the chemical serotonin. The imbalance is passed down genetically as well. But, it’s unclear why some people develop OCD and others do not, even when they share much of the same genetic materials..

Some parents may know that their teens have OCD. For example, they may have witnessed ritualistic behaviors, or their teens may have opened up about the disturbing thoughts they’d been having on a regular basis. However, it is often difficult for parents to see what is really going on, as OCD teens are very secretive. Sometimes, asking the teen a series of questions can be helpful.

Questions to Ask Yourself

If the teen answers “yes” to these questions from the International OCD Foundation, it could be a sign that OCD is playing a role in that teen’s life:

Teens who perform poorly in school, or who face disciplinary action at school due to their actions, might also be at risk for OCD. Sometimes the teen’s teacher can help parents see the behavior clearly, and understand that the child needs help.

Therapy for OCD often involves helping the teen take charge of the unwanted thoughts and control the urge to engage in repetitive behaviors. Often, therapists use a technique called Exposure and Response Prevention (ERP) in teens with OCD. This provides teens with tools they can use when the cycle of OCD begins.

The teen using ERP has to make a conscious decision not to give in to the compulsion until it passes, however. Therapists can provide the teen with a variety of coping mechanisms. Some teens have found yoga, meditation, and art therapy as beneficial coping mechanisms.

Since OCD can cause such disruption to family connections, some families benefit from participating in therapy alongside their teens. They may learn more about OCD and how to control it.  Family therapy helps families work through their symptoms and control their disease. Family support and a sense of connection to those around them is invaluable for teens in recovery from Obsessive-Compulsive Disorder.

Newport Academy programs help teens and their families overcome OCD and move back to happy, brighter days.  Please contact us.