Teens go through tremendous emotional, cognitive, and physical changes. It’s natural for them to experience mood swings and hard days. That’s why parents often struggle to distinguish between typical adolescent behavior and signs of depression in teens.

The intensity and severity of a teen’s difficult emotions and behaviors, as well as how long they last, are important clues for how to tell if a teenager is depressed. Understanding the range of depression symptoms in teens can help parents and other mentors and caregivers recognize when an adolescent is suffering.

What Is Teenage Depression?

Teen depression is a serious mental health condition that threatens a young person’s safety and well-being, as well as their future. The emotional pain a depressed teen undergoes can lead to substance abuse, self-harm, eating disorders, and suicide attempts.

Moreover, depression is not something you can “snap out of” or white-knuckle through. Most adolescents with depression don’t get better on their own. Sustainable healing requires long-term treatment to address the underlying causes and symptoms of depression in teens. Without treatment, the effects of teenage depression can interfere with relationships and school performance, and lead to an impaired ability to work, attend college, or build authentic connections with others.

What Are The Causes of Depression in Teens?

Why are teens so depressed these days? There’s no doubt that external circumstances are contributing to a sense of hopelessness and stress among this age group. They are coming of age in a world fraught with social, political, economic, and environmental problems, many of which seem insurmountable. Furthermore, research continues to show that the effects of social media are undermining young people’s mental health. Device overuse, particularly spending hours scrolling through social media, is directly associated with increased signs of depression in teens.

There are also more personal and individual causes of depression in teens, which our clinicians at Newport Academy are highly experienced in uncovering and treating. These include:

In addition to the causes listed above, there are a number of risk factors for depression in adolescence, according to research from the National Institutes of Health and other organizations. The following experiences and traits make an adolescent more vulnerable to symptoms of teen depression, including:

How Many Teenagers Have Depression?

Looking back at longer-term trends, the CDC found a 40 percent increase over the last decade in the number of high school students reporting persistent feelings of sadness and hopelessness. Furthermore, teen suicide rates have gone up by 57 percent since 2007.

It’s also important to note that LGBTQ adolescents are six times more likely to experience symptoms of depression than the general population, according to teenage depression statistics from the National Alliance on Mental Illness (NAMI). Research shows that family conflict, cyberbullying, and unmet medical needs contribute to the higher rates of depression and suicide among this group.

How Do I Tell If My Teenager is Depressed?

On top of all the hormonal changes and physical growth of adolescence, teens are also in the midst of developing their identities, forming relationships outside the family, and navigating the challenges of school and/or a job. All this, while looking ahead to their future in a world filled with uncertainty. It’s no wonder they feel stress, confusion, and fear sometimes.

However, there is a difference between typical teenage angst and signs of depression in teens. In addition to observing the intensity of a teen’s feelings and behavior, parents need to consider the length of time these feelings last and the domains in which they take place. For example, do they seem depressed at home, but not when they’re at school or with friends? Or is the depressive behavior consistent across all situations?

If the warning signs are severe, last more than a week or two, and extend to multiple areas of a teen’s life, they may have one of the various types of teen depression including major depression, dysthymia, and seasonal depression. 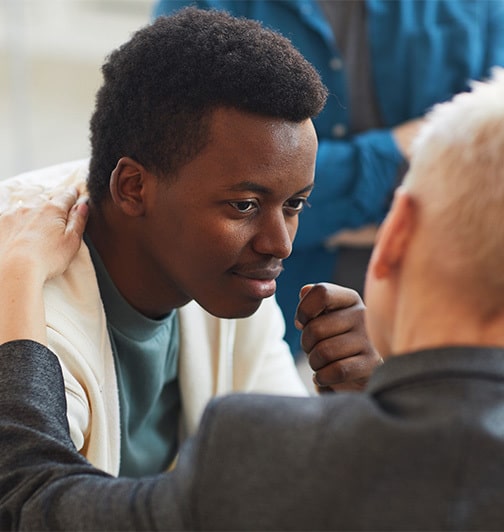 Not every teenager experiences depression in the same way. And teens often find it hard to express what they’re feeling in words. But those who do often use similar phrases to describe depression—a dark emptiness, constant stress and dread, a feeling that everything is without color and nothing matters.

What are the effects of depression in teens during everyday life? While some teens hide their depression and are able to continue functioning at a high level, the majority of depressed teenagers have difficulty maintaining their grades, friendships, and extracurricular activities. Signs of depression in teens also manifest as physical problems—aches, pains, and fatigue that have no medical explanation.

Signs of Depression in Teens

Here are some of the behavioral signs of depression in teens that parents and caregivers can watch for:

Symptoms of Depression in Teens

In addition to observing the behavioral signs of depression in teens, parents may notice indications of the following teen depression symptoms:

Suicide ideation—thinking about and imagining suicide—is one of the most serious signs of depression in teens. It is not the same as planning a suicide, and does not indicate that a teen will definitely make an attempt. But it is a clear indication of underlying depression or another mental health issue. Learn more about teen suicide risk factors.

Common Types of Depression in Teens

There are a variety of different types of depression in teens. A thorough assessment by a mental health professional can clarify the specific diagnosis that teen depression signs indicate.

Also known as dysthymia or chronic depression, is typically less severe than major depression but may last for years, interfering with relationships and daily life.

Depressed teenagers with this form of the disorder experience persistent feelings of sadness, fatigue, and hopelessness.

An emotional or behavioral reaction triggered by a stressful event or circumstance. Adjustment disorder can also manifest as anxiety symptoms, or as a combination of anxiety and depression symptoms.

Typically triggered in winter due to lack of sunlight, although for some people, symptoms start in summer. People with this type of depression usually feel better once the weather changes, and then experience symptoms again the following year at the same time.

Has several specific symptoms, including increased appetite, excessive sleep, and an extreme sensitivity to rejection.

A type of major depression in which symptoms include some form of psychosis, such as hallucinations, delusions, or other disconnections with reality.

Characterized by manic periods interspersed with times of either depression or relative emotional stability (bipolar I) or cycling between depression and periods of milder symptoms (bipolar II).

How Treatment Makes a Difference

The effects of depression in teens can have far-reaching consequences for an adolescent, following them into young adulthood and beyond. The longer teen depression symptoms continue, the greater the negative—and possibly life-threatening—impact. While antidepressant medications can help with symptoms, therapeutic treatment heals the underlying issues and provides lifelong skills for building resilience and self-esteem. With effective, evidence-based treatment, a teen can begin to enjoy life again, and look forward to the future with a sense of hope and possibility.

Insurances We Work With

We work with most major insurance companies, including both In-Network and out-of-network payers, to optimize access to care for families.

Newport holds the Gold Seal of Approval® from The Joint Commission, the nation’s oldest and largest healthcare accrediting body, and is affiliated with a wide range of national organizations and certification bodies.