To a teenager, alcohol and caffeine may seem like the perfect combination.

After all, alcohol helps you loosen up and have fun, while caffeine gives you the edge you need to keep partying all night. But in reality, caffeine can provide just enough stimulation to keep teens drinking beyond their body’s limits, putting them at risk of a deadly alcohol overdose. The dangers of caffeinated alcoholic beverages are vast and extremely serious for developing adolescents.

Alcohol and Caffeine: A Fatal Mix
Why Do CABs Appeal to Teens?
Dangerous Marketing Strategies
Fighting the Influence of the Media
Getting Help for Alcohol Abuse

What makes caffeinated alcoholic beverages, known as CABs, so alluring to teens? Slick marketing campaigns, fun flavors and colorful packaging make these drinks attractive to high school and college students. Peer pressure and the stress of school and home life can also contribute to heavy drinking in teens. The danger of caffeinated alcoholic beverages is that teens may not realize how much alcohol they’ve consumed until it’s too late.

About 1 million high school students engage in binge drinking, according to the National Institute on Alcohol Abuse and Alcoholism. And, each year nearly 5,000 young people die from alcohol abuse.


Alcohol and Caffeine: A Fatal Mix

Binge drinkers may not drink alcohol every day, but when they have the opportunity, their typical pattern is to consume at least four to five drinks in a couple of hours. Drinking four or five cans of a caffeinated alcoholic “energy” drink may seem effortless when the jolt of caffeine keeps the buzz going. But a teenager who isn’t used to drinking can easily go over his or her limit, resulting in a deadly overdose.

Caffeine, a stimulant, increases activity in the brain and nerves, while alcohol, a sedative, depresses brain activity. Teens may assume that because caffeine makes them feel alert and energetic, it counteracts the harmful effects of alcohol. But in fact, caffeine doesn’t change the way alcohol is metabolized by the body.

What caffeine can do is blunt a teenager’s perception of how alcohol affects his or her mind and body. In a study published in a 2006 issue of Alcoholism: Clinical and Experimental Research, scientists found that young people who combined alcoholic beverages with an energy drink were much less aware of the symptoms of intoxication. However, the fact that the young drinkers didn’t perceive the effects of alcohol made no difference in their breath alcohol concentrations or in tests of their physical coordination.

In other words, the study participants weren’t any less intoxicated — caffeine just made them think they were.

Effects of Alcohol on Teens

Alcohol can have devastating effects on a teenager’s health. Furthermore, at this age, the brain is still developing and the body is still growing. Teens who drink are more likely to be overweight and have high blood pressure, warns the Nemours Foundation. Teenagers who drink into adulthood may suffer serious damage to their brain, liver and heart. Intoxicated teens are not only at higher risk of an accident or altercation. They’re also more likely to engage in dangerous behaviors like unprotected sex with multiple partners, illegal drug abuse, and prescription drug abuse.

Why Do CABs Appeal to Teens?

Made with malt liquor, caffeine, sugar and non-caffeine stimulants like taurine and guarana, CABs seem to be uniquely designed to appeal to underage drinkers. Underage drinkers are drawn to the relaxing influence of alcohol, which helps them let go of stress, fear and inhibitions. Therefore, from the perspective of a teen who abuses alcohol, caffeine just lets them have more of a good thing in a shorter period of time.

On top of that, a 24-ounce CAB has as much caffeine as five cups of coffee. Compared to the relatively mild effects of beer, a CAB packs a much bigger punch. On top of that, CABs have an edgy, underground allure that make them much more attractive to an impressionable teen.

It’s no accident that a lot of the marketing for CABs is eye-catching, colorful, and energetic. And, the advertising strategies  are designed to target teens and young adults with campaigns that appeal to their love of extreme sports, cars and underground culture. Also, CABs are marketed heavily on the Internet and social media, both by their manufacturers and by consumers.

The brand names of these products suggest that their target market is under age 25:

For years advertisers have been selling energy drinks with slogans that promise to keep you going (“Red Bull gives you wings”) for hours on end. However, while alcoholic cocktails mixed with Red Bull are nothing new, pre-made CABs are a fairly recent addition to the market.

Fighting the Influence of the Media 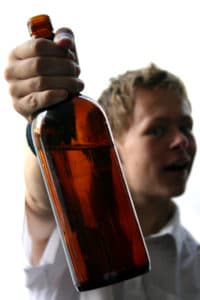 Public resistance to caffeinated alcoholic beverages extends from local grassroots movements to national regulatory efforts. In 2009, the U.S. Food and Drug Administration notified a number of producers of CABs of its intentions to look into the legality of these drinks and the health risks of consuming caffeine with alcohol.

In addition, public awareness of the risks of CABs has motivated some communities to initiate local campaigns to warn parents and teens about the risks of mixing alcohol with stimulants.

Manufacturers of popular CABs claim that underage drinking is a nationwide problem, and that cultural and social influences, not the beverages themselves, are at fault for teenage alcohol abuse.

When it comes to fighting the power of advertising and social networking, it’s easy to feel helplessly overwhelmed. Parents often feel that they’re powerless to fight the influence of the media, which reaches into every aspect of a teen’s life. Furthermore, with CABs being formally and informally promoted on the Internet, what can a parent do to convince a teenager that caffeine and alcohol are a deadly combination?

Getting Help for Alcohol Abuse

If you’re the parent, guardian, counselor or concerned friend of a teen, you might feel like you’re walking on eggshells when you try to bring up the subject of substance abuse. Also, teenagers who abuse alcohol can become defensive or secretive when they’re confronted about the signs of drinking.

Although it’s important to let teenagers learn from their mistakes, it’s impossible for a caring parent to sit back and watch a teen self-destruct with alcohol or drugs. The Mayo Clinic recommends establishing an open dialogue about alcohol with teens and discussing drinking on a regular basis.

If you’re concerned about the widespread popularity of CABs, here are a few other ways you can take action:

Fortunately, you can get help for your teen from compassionate professionals who also care about your son or daughter’s future.

The intensive residential treatment offered by us here at Newport Academy addresses the psychosocial factors that drive underage drinking and make products like CABs so dangerously alluring.